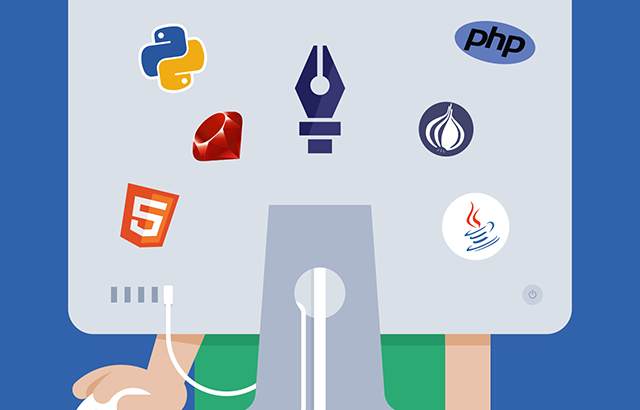 Many designers think each discipline should mind their own business, while others see no problem in professionals wearing multiple hats. Many developers see designers who code as a threat, while others see it as a facilitator. This is a hotly debated subject, and although I think some great designers are also superb at coding, I will always defend that the more you focus on a particular area the best you will be at it. But this shouldn’t be a reason for you to miss out on the benefits of having another skill under your belt.

Learn how to code and make yourself a great asset to any multi-disciplinary team.

As a designer who has gone as far to set up Linux servers and program back-end, I see no question that understanding ‘the basics’ of coding would benefit any designer. The question really is, how much coding should designers learn? At what point might designers be wasting their time, or really stepping over the line into the territory of developers?

In order to provide some insight into the potential benefits of learning to code, I’ve broken the different levels of coding knowledge down into degrees of usefulness.

END_OF_DOCUMENT_TOKEN_TO_BE_REPLACED

My name is Jason Nesbitt and I am the founder of Nesbitt Web.

I'm an award-winning Creator and Fixer of Websites & Apps.

With 15+ years of award-winning reliable experience, I will remove all of the headaches, listen to you and do everything for you to get things looking exactly the way you want.

This is a VERY entertaining story on how not to ha

So...it turns out that listening to music whilst w

Ever wanted to really see AI in action 😲? Chec

Ever wanted to run your own music festival, but do

Not sure why WhatsApp thinks my "Website Fixes" pr